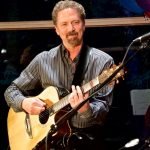 (This workshop presumes a fundamental knowledge of music and lyric songwriting. New students will be accepted via permission from the instructor.)

In this workshop, students are encouraged to move beyond their comfort zone, including creating songs around a central lyrical or musical idea, exploring genres/styles of music they might not have attempted before, and grasping advanced music concepts.

In-class, on-the-spot writing to prompts may inspire and lead to a song; writing from different points of view beyond the autobiographical will be explored. Students may opt to write and/or complete multiple songs for review and critique.

As this is an advanced workshop, review will be rigorous for those who feel they will benefit from it.

A portion of each 2 1/2 hour-session is devoted to the business of music and the myriad ways of getting music heard by industry professionals.

The workshop concludes with a live showcase of the songwriters and their songs.

A.J. Gundell is a musician, composer, songwriter, teacher, producer and publisher. He has won 13 Emmy awards, including three Emmy awards for Outstanding Original Song, and others for work as a composer, audio post sound design and production, and as a music director/supervisor in the category of Music Direction and Composition. His work has been featured on ABC, CBS, NBC, PBS, Fox, ESPN, MTV, NBA-TV, HBO, Disney, Discovery and more.

He is the CEO of Future Hits, which has supplied more than a thousand cuts in film, TV, advertising and on the Web over the last 10 years. A.J. performs with the band The Helium Brothers. See his bio here.